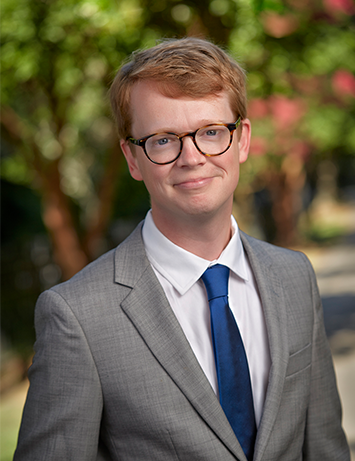 Taylor Kearns is a filmmaker at heart and a professional communicator by trade. Ever since he got his hands on the family camcorder as a child, he’s been using video and sound to tell stories. In college, he turned that love of moving pictures into a career in broadcast journalism. He went on to earn two regional Emmy awards for his work.

With seven years’ experience as a photojournalist and reporter, Taylor sought out the feature stories he knew would resonate with viewers. While others handled the nitty gritty, investigative pieces, Taylor looked for creative angles on stories that might have otherwise been forgotten. Whether chasing down a wayward emu in the hinterlands of South Carolina, or following the harrowing rescue of a dog in an abandoned well, Taylor strived to tell you a story in a way you wouldn’t forget. Often, this meant getting to the point of a piece in a quick, yet compelling way.

The same skill set would come in handy when breaking down complex subjects and making them easy enough for a casual viewer to understand. A good feature story is one thing – explaining the impact of a massive business development is another. With attention to detail and an eye always on what mattered most to the person at home, Taylor has established himself as a trusted storyteller who can deliver information in a way that makes sense. It’s an ability he continued to develop while running his own video production business, working with clients to communicate their brands and missions clearly and quickly.

A lifelong South Carolinian, Taylor is from Hartsville but has lived in Columbia since attending the University of South Carolina. While he’s not out shooting video, you’ll probably find him in his garage learning the art of woodworking or enjoying reruns of ER (he’s never seen it, no spoilers!) with his wife, Caroline, and their two border collies, Ruby and Joey.